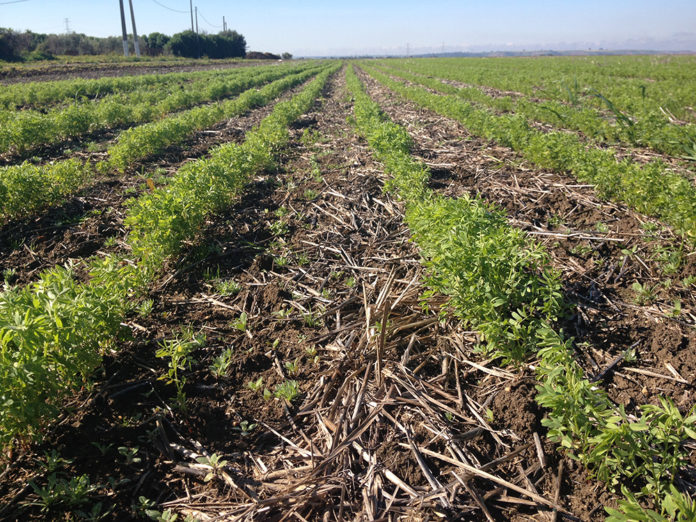 Morocco is increasingly confronted with drought effects on crop production, as 93% of the country is semi-arid (Verner et al., 2018). To mitigate the effects water scarcity on agricultural production, farmers should combine all available production technologies and practices to produce more food per cubic meter of water. Direct seeding or no-till is one of those practices.

The potential of direct seeding technology for small farmers, such as the majority of grain legume growers, could be important.

Two sets of farmer’s lentil fields, one under direct seeding and the other under conventional cultivation, were compared for their productivity during the 2015 season.

The two plots of conventional lentil cultivation, to serve as a comparison for performance and profitability between the two lentil seeding systems, have also been installed at two other farms which also belong to the category of large farms.

All these fields are located in the area of Ain Sbit, which is characterized by very favorable soil and weather conditions for production of lentils in the Zaer region.

The total area of each trial is one hectare. These plots all have cereals as the preceding crop to benefit from cereals-legumes rotation. The description of the cultivation practices of these fields is shown in tables 1 and 2.

In addition, 80 lentil farmers from Brachwa, Ain-Sbit and Merchouch regions, were surveyed to get their experience with lentil direct seeding and their prospects for its adoption in the coming years. The main four sections of the survey questionnaire were (1) information about the farmer and the farm, (2) cultivation practices of lentil production, (3) economics of lentil production and (4) farmer attitude toward the technology of lentil direct seeding.

Characterization of the surveyed farmers and farms

The surveyed farmers producing lentils in the study area are quite heterogeneous. They have an age ranging from 27 to 80 years (average of 50 years), regardless of the seeding technology used (Direct Seeding (DS) or Conventional Seeding (CS)). The education level of these farmers also varied from illiterate to the university level.

The average area sown to grain legumes is about 16 ha per farm and the average acreage sown to lentils is 7.5 ha. Legumes constitute 30% of the arable land of which 50% is devoted to lentils.

The legal status of land is mainly of private property (Melk) and association among stakeholders. These two modes of property concern nearly 75% of the arable land of the surveyed farms. Thus, only a few farms have a collective ownership land status.

Soil types where lentils are grown are mainly of the clay types. This was the case for about 83% of farms surveyed. Only few fields have other soil types locally known as Hamri, Hrech and Rmel.

Lentil cultivation practices of the 80 surveyed fields, either under conventional or direct seeding, are presented in table 3.

The conventional lentil cultivation starts with soil tillage with a stubble plow or a chisel just after the harvest of the preceding crop, usually a cereal. A disk harrow is used to prepare the seed bed just before planting.

Seeding rate is between 70 to 100 kg/ha depending on the variety and most farmers use cereal seeders for planting. Most farmers use simple line seeding with a distance of 60 to 70 cm between lines. The old lentil variety L56 is the widely used genotype. Seed origin is mostly from the farm itself or from the local market and rarely certified seed.

Weed control in conventional lentil cultivation is usually achieved using a combination of manual, mechanical and chemical means for 60% of farmers. The chemical weed control that is used by these farmers consists of anti-monocots applied as post emergence herbicide during the cropping cycle.

Most farmers use chemicals to protect their crops against disease and pests. The major diseases are Oïdium, Anthracnose, rust, Septoria and Mildew. The major pest is Bruchus.

Harvest is carried out manually and a threshing machine is used for grain separation. The average yields obtained in conventional lentil cultivation vary from 400 to 1500 kg/ha.

The direct seeding cultivation of lentils is slightly different from the conventional practice. Obviously, soil tillage is not used in this technology.

The other major differences between direct seeding and conventional cultivation of lentils is that, in our sample, the seed used is certified although the same varieties are used in both systems. Farmers place seed deeper (5 cm) in direct seeding of lentils.

In addition, weed control is somewhat different between the two systems. In direct seeding system, mechanical means of weeding are practically absent. For chemical weed control, and in addition to control of monocots in post emergence, direct seeding farmers control weeds by the use of pre-sowing herbicides such as glyphosate.

The average lentil grain yield of the two on farm direct seeding trials in Zaer was 1220 Kg/ha while that of the corresponding conventional cultivation trails is 1360 Kg/ha (Figure 2). Straw yields of the two on farm trials were respectively 1430 Kg/ha and 1670 Kg/ha.

Conventional cultivation of lentils tends to be superior over direct seeding. However, the difference is not statistically significant and we conclude that the two systems have the same productivity in terms of grain and straw yields.

Grain yield comparison alone between conventional and direct seeding of lentils is not sufficient to evaluate the potential of adoption of direct seeding technology. We should also consider the economic benefit for the farmer through the calculation of the gross margin based on production charges and value of the products.

The results of the survey of 80 lentil fields, 40 direct seed and 40 conventional, regarding the charges of lentil production are presented in table 4.

Lentil production charges are on average about 5300 Dh/ha, with no significant difference between conventional and direct seeding systems.

Weed control and harvest are the two operations that dominate production charges of lentils, in either conventional or direct seeding system. They respectively represent 30% and 23% of total production charges.

Gross margin is the difference between the value of total output and variable costs. The results of the calculation of the average gross margin for conventional lentil growing is 2729 Dh/ha and that of direct seeding system is 2456 Dh/ha.

Gross profit from conventional lentil cultivation is slightly higher (+ 273 Dh/ha) than that of direct seeding system, although the difference is not large.

The majority of farmers surveyed were in their fourth year of direct seeding adoption. Hence, the lack of difference in the profitability due to the absence of significant differences in production charges and value of production can be explained by the need of many years of practice of direct seeding before these benefits are tangible.

Furthermore, in recent years the weather conditions were very favorable in the region, which helps explain the lack of difference in performance between the two lentil seeding systems. Given that the benefits of direct seeding appear especially during years of drought, since it helps to keep moisture in the soil to subsequently cover the water requirements of the crop. Then, an increase in yield and profitability, compared conventional seeding, is to be expected.

The majority of farmers (83%) say they know about no-till while 17% say they have never heard of this technology and have no idea what it is about. This can be attributed to a lack of communication and information exchange between farmers and the actors responsible for this mission.

According to the results of our surveys, 62% of farmers have no opinion on the no-till system since they have never tried it, and this is also due to the lack of no-till seeders which are available only for farmers who are members of one of the three existing farmer’s associations in the region. In addition, 19% of farmers believe that no-till is a good choice, while the remaining 19% think it is a bad choice.

Farmers who think that direct sowing is good justify their answer by the fact that it generates higher yields than conventional sowing (45%), reduces tillage costs (13%) and “save time” by reducing the number of tillage tools (7%) (Figure 3).

The farmers who said that direct seeding it was a bad choice, explain their opinion mainly by the lack of seeders (45%), the increase in weed control needs due to the increase in the infestation of the lentil by weeds (30%). Then comes the need for a fine type of soil which limits direct seeding for other types of soil (15%) and finally the requirement for narrow inter-row spacing which hinders the passage of mechanical weeding tools (10%) (Figure 4).

Only 33% of farmers are willing to adopt no-till for the lentil, while those who are against represent 67%. This can be explained by the fact that there are farmers who have a positive opinion on the technology and yet they do not want to adopt it.

In light of the above, we can conclude that the majority of conventional sowing farmers have no idea about direct sowing of the lentil since they never have the opportunity to practice this system in their fields.

In addition, the major constraint for the adoption of this system is the shortage of no-till seeders, which are 3 and available within the associations of farmers which limits the diffusion of this technology to farmers.

Extension activities toward farmers are a very important pillar to make the farmer more aware of this technology and its advantages, whether in the short or long term. Providing seeders to farmers will also broaden the spread spectrum by offering the possibility to several farmers to adopt this system.

92% of farmers only introduced no-till recently (4 years ago). While 8% of farmers adopted this system more than 8 years ago, which shows that most farmers do not have much experience with this new no-till technology for lentils.

The majority of farmers surveyed said that this no-till system is very effective for the lentil (79%) while 15% see that it has average efficiency and the rest 6% see that it is not effective.

While the 6% of frarmers who said that it has low efficiency declare that in direct seeding weed infestation is higher than in conventional seeding and that it requires reduced spacing which does not allow for mechanical weeding.

Farmers’ opinions on the advantages and disadvantages of no-till

According to our surveys, the main advantages of direct sowing on lentils according to farmers are: reduced costs (40%), improved yield compared to conventional sowing (27%), soil conservation (20%) and state subsidy (13%) (Figure 5).

From figure 6, it can be seen that the main disadvantages of direct sowing on lentils are:

• Lentil infestation with weeds (29%), which becomes higher than in conventional sowing;

• The need for water before sowing the lentil, which makes the sowing date dependent on rainfall (21%);

• The requirement for narrow spacing which does not allow mechanical weeding (15%);

• The requirement for a fine type of soil (12%) which does not allow direct sowing in other types of soil;

85% of farmers are willing to continue direct sowing of the lentil and only 15% are against the adoption of this new lentil sowing technology.